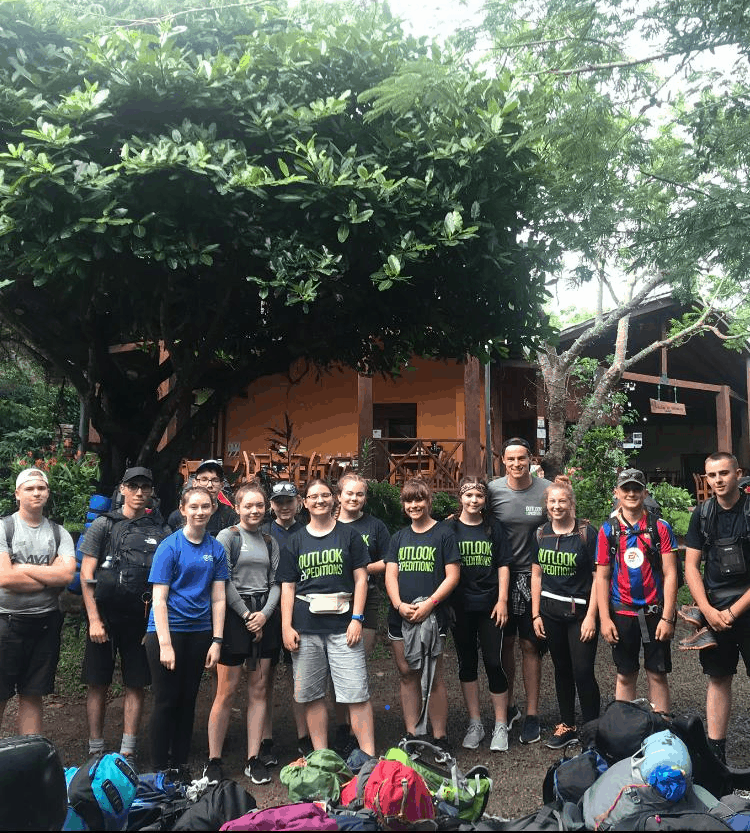 On the 16th of July 2019, a group of 15 students and two teachers travelled to Costa Rica on an expedition overseen by Outlook Expeditions. During the three weeks that we were there, we immersed ourselves in the local culture, ate a variety of different foods; some that we enjoyed and others that we didn’t and developed our linguistic skills in Spanish! We also saw a variety of unusual wildlife, some that we had never seen before, such as Praying mantises, Cicadas, sloths, crocodiles and vultures.

The expedition had three main parts: a physically and mentally gruelling trek in one of the highest regions of Costa Rica, a community project and some relaxing and adrenaline activities.

During the Trek, we faced a very steep hill that we had to climb every day but everyone persevered and we conquered the challenge. As a result, we were rewarded with a swim in a waterfall and a visit to some natural hot springs – although the smell of sulphur was a little overbearing – and for some the opportunity to see some monkeys such as the white-faced capuchin and the Central American squirrel monkey. The final trek phase involved a challenging hike through tough terrain through the National Park and up to some spectacular sights of volcanoes, waterfalls and boiling mud pots.

After our trek, we had a day back in San Jose, the capital, before we travelled to the La Luchita Women’s Project. This involved travelling on local buses for hours- with no air conditioning! At La Luchita, we helped with some landscaping, trench and foundation digging and painting – managing a few games of football with local children after work. We even had the chance to see how coffee is made at a local plantation and even got stuck in picking coffee beans and grinding coffee. We also went to the Elementary School and High school in La Lucha, where we were shown around and met some of the children and played a few games of Pictionary in Spanish. Of course, Mrs Lydon also gave us some maths problems to solve with the children in Spanish! This was a humbling and emotionally poignant part of the trip and made us realise how lucky and fortunate we are.

After this, we had some much-needed recuperation in Playa Uvita. Although we were a bit of a walk from the beach, this didn’t stop us from persevering in the heat and walking down. The other days were spent souvenir shopping and relaxing in the hammocks in the hostel that we were staying in, which was set in the jungle. There was also another waterfall near us, which we had fun swimming in and jumping into the deep pools from an overhang! A memory we won’t forget in a hurry is coming back to the lodge after dinner one night to find an extra guest… a snake!

The final day was spent enduring the rapids of the Rio Reventazon in rafts. White Water Rafting really was an adrenaline rush and we all loved it! We returned safe and sound after a long and tiring journey on the 5 August 2019.

The trip was extremely enjoyable and the students and teachers will always value the experience and memories that we made from our time in Costa Rica.

Mrs Lydon said “This was an experience that I thoroughly enjoyed being part of. The rich life experiences that the students gained throughout the expedition have not only built their resilience, but developed their emotional and personal characters. Mr Jackson and I are incredibly proud of the team work, courage, determination and sensitivity that you all demonstrated. We could not have asked for a better experience with you all.”

We want to thank Alex from Outlook Expeditions, Mr Jackson, Mrs Lydon, the school and our families & friends for making this happen.