As we fast approach Easter, I would like to summarise some of the thrilling events that have taken place in the last few weeks or so that have made me so proud to be associated with Wollaston School. You will have seen from our photo headlines on the front of our website that there have been a number of events in which the school has excelled in competition with other local schools.

About two weeks ago, 50 of our students were involved in the Wellingborough Music Festival. All produced performances to be proud of, many achieved accolades and winning performances which were celebrated at the show and both the orchestra and big band won their respective open competitions, leading to a prestigious invitation to close the final show with their winning performance.

On Sunday night, 27th March, our school took part in the regional Rock Challenge competition for the first time, held at Milton Keynes theatre. This is a competition against other schools to produce the best dance performance on a set theme and the winners are rewarded with an invite to a final competition in Portsmouth at the end of April. The theme chosen by our school was ‘My heart will smile’ focusing upon the plight of refugees around the world. Our school competed against five other schools in the region for a place in the final. The competition is judged on 15 different award categories and I’m delighted to say that Wollaston swept the board, winning 13/15 categories, including choreography, music, lighting and a host of others. Perhaps the award that I am most proud of was the award for ‘Spirit of Rock Challenge’, which is voted for by all the schools taking part and Wollaston students picked up this highly prestigious accolade. 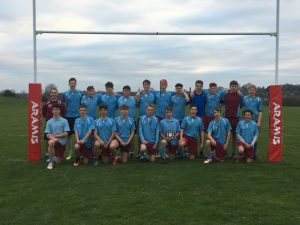 I am equally delighted to announce the success of our Year 11 rugby team, who recently won their County Cup final against K.B.A. by a margin of 47 points to 12 , overcoming some early nerves as underdogs, to seal the match with an outstanding first half performance. Our PE faculty is also continuing to build capacity for the future, endorsed by our Year 9s, who recently won their seven-a-side district tournament. x

Last Friday, for Red Nose Day, we tried a different approach to this event this year and set up a number of sporting competitions in which students could compete to earn points for their houses. The event included a cyclathon competition, a ‘Sally-up Challenge’, in which students competed for fitness and endurance, and a staff versus sixth form netball competition in which about 60 staff and students took part. Voluntary charity donations were added to the total sum raised for charity this year, exceeding several thousand pounds.

I think that most parents and students are aware of the high quality of food provided by Cucina, our caterers. I am delighted to announce that after their recent annual inspection by the environmental health officer, that we received the maximum five-star award for hygiene in our school kitchens and dining area. Congratulations to all of the team who provide our food service to our students.

Parents will be aware from a letter by Mr Taylor, our Business Manager, earlier in the year that we have changed our uniform supplier. Our main school uniform is unchanged, but we are looking to update and improve our PE uniform offer. We have currently created a display of some preferred items outside our main Hall and have asked students to give us their feedback, so that we can produce the best possible PE uniform for them. Click here to see some of the items on offer.