Activity Days.
At the end of June years 7 to 10 had two days off timetable from normal lessons to focus upon personal, social and health education. A whole range of visiting speakers came to school to present to students about a range of important social issues. These included Solv-it, a group who presented to year eight students about the dangers of drug abuse. Year nine students took part in some extremely powerful workshops with a group called Human Utopia which challenge them to consider their own behaviours and aspirations, whilst year 10 students were involved in workshops with the police, prison officers and rehabilitated offenders to examine the serious topics of radicalisation and extremism.

Transition for Year 6 students.
On the third and fourth of July, we had visits from 240 year six students who will become members of the Wollaston school community in September. The students took part in a whole range of activities across a number of curriculum areas to give them some taster experiences of their new curriculum package in September. We are delighted to welcome all of these young people to Wollaston.

Buddy readers’ breakfast celebration.
On Wednesday, 5 July, a breakfast meeting was organised for all of our key stage III students who have been supported through the year by six form students to help them develop their reading and literacy skills. Led by Miss Gamble, this was a really touching event where it was plain to see the strong relationships that are developed between our older students and the younger ones who have benefited from this academic support.

Geography field trip to Norfolk.
On Wednesday, 5 July about 90 year 10 students took part in a geography field excursion to Cromer on the North Norfolk coast, to collect data for geography GCSE fieldwork. The group were investigating erosion and longshore drift of sediment along this part of the coastline and spent about three hours on the beach, collecting data about sediment movement, wave movement and beach profiles. This will be written up as part of their assessed coursework for their GCSE entries next year.

Sixth form induction for incoming year 12 students.
On Thursday, it was the turn of our sixth form team to Houston off timetable day for year 11 students who intend to return to Wollaston to join the sixth form in September. The main focus of the day was designed to provide taster sessions across a wide range of academic subjects, so that students can ensure that they are signed up for the right courses which commence in September. About 150 students took part in the day, which was a great success.

Sports day.
On Friday, 7 July, our annual sports day took place for over 900 students in years 7 to 10. In the morning. The main theme was participation for all through a number of full activities, which ranged from netball sharpshooting to ‘welly wanging’ and students were invited to earn as many house points as possible. Alongside these events, our elite athletes took part in 800 m and 1500 m distance running events and field athletics, including shots discuss, and javelin. In the afternoon, our elite runners took part in the sprints and middle-distance events to compete for the sports day shield. How PE team ran the event, ably assisted by dozens of six form helpers who gave up their time to supervise the events. I’m delighted to announce that the overall winners of the competition was Nightingale House. 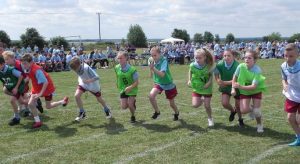 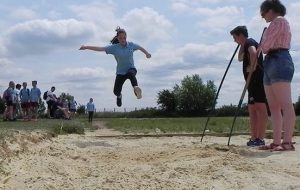 Year 11 Prom.
Following the completion of the year 11 GCSE exams, one of the highlights of the year for our students is the annual Prom. which takes place before students go on to pastures new after the summer holiday. This took place at the Sharnbrook Hotel and over 150 year 11 students presented themselves beautifully in evening suits and ball gowns. Organised by Mrs Hobson and Mrs Ratledge, the event was a great success, culminating in the crowning of the Prom King and Prom Queen, Tom Spencer and Poppy Beale. 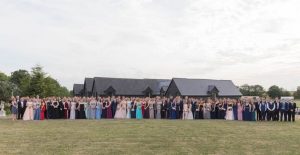