I trust that you have all had a refreshing May half term break, with the possible exception of students in year 11 and year 13 who will, no doubt, have been focused upon revision for the second half of the formal examination period. We are now just over halfway through the final exams, which continue until 26 June. Beyond that, many students in year 11 and year 13 will have their respective ‘Proms’ to look forward to. I am pleased to report a number of enrichment activities that took place just before the school holidays and these are summarised below.

Students from several year groups started work building a Citroen 2CV race car around 3 years ago. The car was built entirely from spare parts. They started with the chassis and the rest was built up from there. Sixth Form students used their enrichment time to build up a rolling chassis with a fuel t

ank and re-furbished brakes. Current Year 10 & 11 students have added the engine and gearbox and all the electrics. The Year 9 Vehicle Engineering after-school club added the finishing touches with the primer coat of paint and tyres plus shock absorbers and the exhaust. Mr Hollis-Brown gave it a quick respray in racing blue at 1am before the race day and then the race car was loaded up and trailered to Cadwell Park race track. Due to some electrical faults, the car missed the first qualifying session but was out for the second session and claimed 17th of 19th on the grid and was the quickest Class B car.

Sunday was the race day and with no time set in the first qualifying, Car 73 lined up at the back. After a good start, Mr Hollis-Brown experienced some severe steering issues caused by 2 failed shock absorbers. However, the second race was more successful and with some new shock absorbers borrowed from another team, Car 73 held off Car 67 to take 17th place overall and a Class B win!

Everyone at the track was very impressed that the race car had been built entirely by students. All the Wollaston School Vehicle Engineering students should feel very proud of what they have achieved! The next race for the Wollaston School car will be March 2018. Mr Hollis-Brown will be working hard with students to improve the performance of the car, aiming to prepare it for Class A in the future. 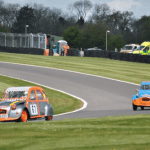 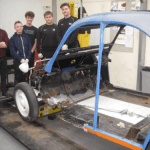 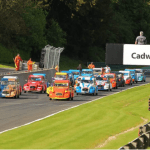 I am pleased to announce that Ethan Jennings was involved in a fantastic concert with NMPAT’s Foundation Wind Orchestra on Saturday 20th May at Spinney Theatre, Northampton. He was a real credit to your school and his musicality, hard work and enthusiasm helped make FWO 2017 a truly uplifting and rewarding experience. Feedback from children, parents, everyone in the audience and the other NMPAT groups on the night has been fantastic. If you wish to know more about this event, visit www.nmpat.co.uk

Two Thirds Sky (a local professional dance organisation), asked Wollaston School dance students to be involved in a new adventure linked to the Richard Alston Dance Company. Richard Alston is a professional choreographer on international repute.
On Wednesday 19th April, a mixture of 20 GCSE and A Level Dance students attended a workshop led by an ex-Alston Dancer, director of Two Thirds Sky and an ex-professional dancer. During the workshop the three professionals, Miss Meeks and Miss Stone made a short list of five students linking to the criteria provided.
On Sunday 21st May the five chosen students; Cole Dilley, Edwin Cheng, Phoebe Leighton, Matt Brion and Emma Tyler attended a six hour master class at Northampton University where they learnt Merce-Cunningham technique and repertoire from Alston’s professional works.
We have just had confirmation that all five students have been successful in making the final stage of the audition process and will be working on a new dance work choreographed alongside Richard Alston and Two Thirds Sky.
This is an amazing opportunity and the Dance team is extremely proud and excited that our students have been chosen to work with such an amazing and current choreographer.

Last half term, several PE students became involved in the Raising Aspiration and Improving Resilience [RAIR] Project. The project uses sport as a focus for developing self-confidence in students and levels of resilience to overcome barriers to success. The group are supported by Alistair, a member of the RAIR project and Mr Bevan and just before half term, the group made a presentation to Mr Cowell to explain what they had learned from the project. A spokesman for the group said;
“The project has improved all of our levels of resilience in both sporting and academic areas. It has helped us to bring confidence in any challenges we may face in the future. We now are working with Mr Bevan and hoping to pass the work we have learnt to future generations here at Wollaston School and create a lasting legacy for our project.”

Congratulations to Mr Myers, who, during half term, was recognised for his work with grassroots soccer in the County and was presented with the award as coach of the year for his work with parklands FC. We are all very proud of Mr Myer’s achievements. 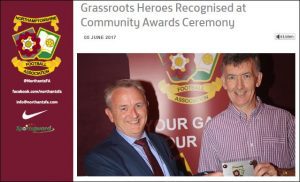 Best wishes for staff who are moving on.

I would like to record my thanks and best wishes to several members of staff who moved on to pastures new during half term. Kate Ball has worked to Wollaston school as a Student Manager for 15 years and provided enormous support for literally thousands of students during that time. Kate is moving to Derbyshire. Andy Sanders has worked at Wollaston for over four years and has made an enormous contribution to the work of the school. In that time, he has been pivotal in helping to transform the quality of the school environment for our students. Andy is now moving to Cornwall with his family. Bonnie Baucutt has been our cleaning team supervisor for the last three years and has also been instrumental in raising the quality of the working environment for everybody at Wollaston. Bonnie is now moving on to a new role in the next stage in her career. All of these staff will be a sad loss to Wollaston and we wish them all the best of luck in the future.