On Friday , Northants County Cricket held their Age Group Presentation Evening. BBC radio’s Andrew Radd was the host as players from the 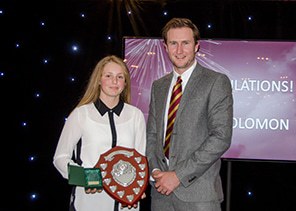 County Age Group sides were recognised for their outstanding performances throughout the summer. Also in attendance was Northamptonshire County Cricket Club captain Alex Wakely, who presented some of the awards.

All players who had scored 100s/50s or taken 4/5 wickets (depending on their age) were presented with commemorative trophies, as well as batsman and bowlers of the year at each age group.

Awarded for the first time in 2016, the Girls County Age Group Player of the Year went to our very own Bethan Solomon. Bethan had already been presented with both the Batsman and Bowler of the year trophies for the Under 15 girls, and had been in contetion to do the same in the Under 17s in a season which netted her 615 runs and 31 wickets, making her the highest wicket taker and third highest run scorer throughout the Player Pathway.