On Saturday 27th January 2018, the Rock Challenge fundraising team organised a Dawn Til Dusk dance to raise money for the Rock Challenge event, which takes place on Tuesday 13th March 2018 in High Wycombe. The aim of the event was to raise enough money to try and pay for the coaches to High Wycombe. We’ll keep you posted on the final amounts raised. 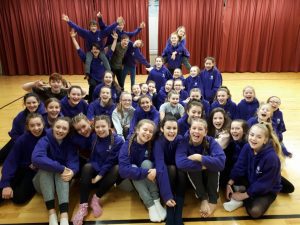 All of the pupils involved worked their absolute socks off for the whole time. MU1 was transformed into a costume area and had 12 parents/grandparents helping to fit, stitch and accessorise costumes  throughout the 12 hours which means that the vast majority of the costumes are now stitched and fixed! Someone was dancing within the Black square we laid on the floor at all times within the 12 hours and the pupils were really conscientious about this.

All of the parents who came in to help could only say incredibly positive things about the students and several said how privileged they felt to be working with such committed pupils with such ‘impeccable manners’.

Well done to the students and Performing Arts Team, hopefully lots of money will be raised.