Everyone at Wollaston School has a responsibility to keep our children safe and protected.  If you have any concerns about the welfare of a child in our school please speak to our Safeguarding Team. 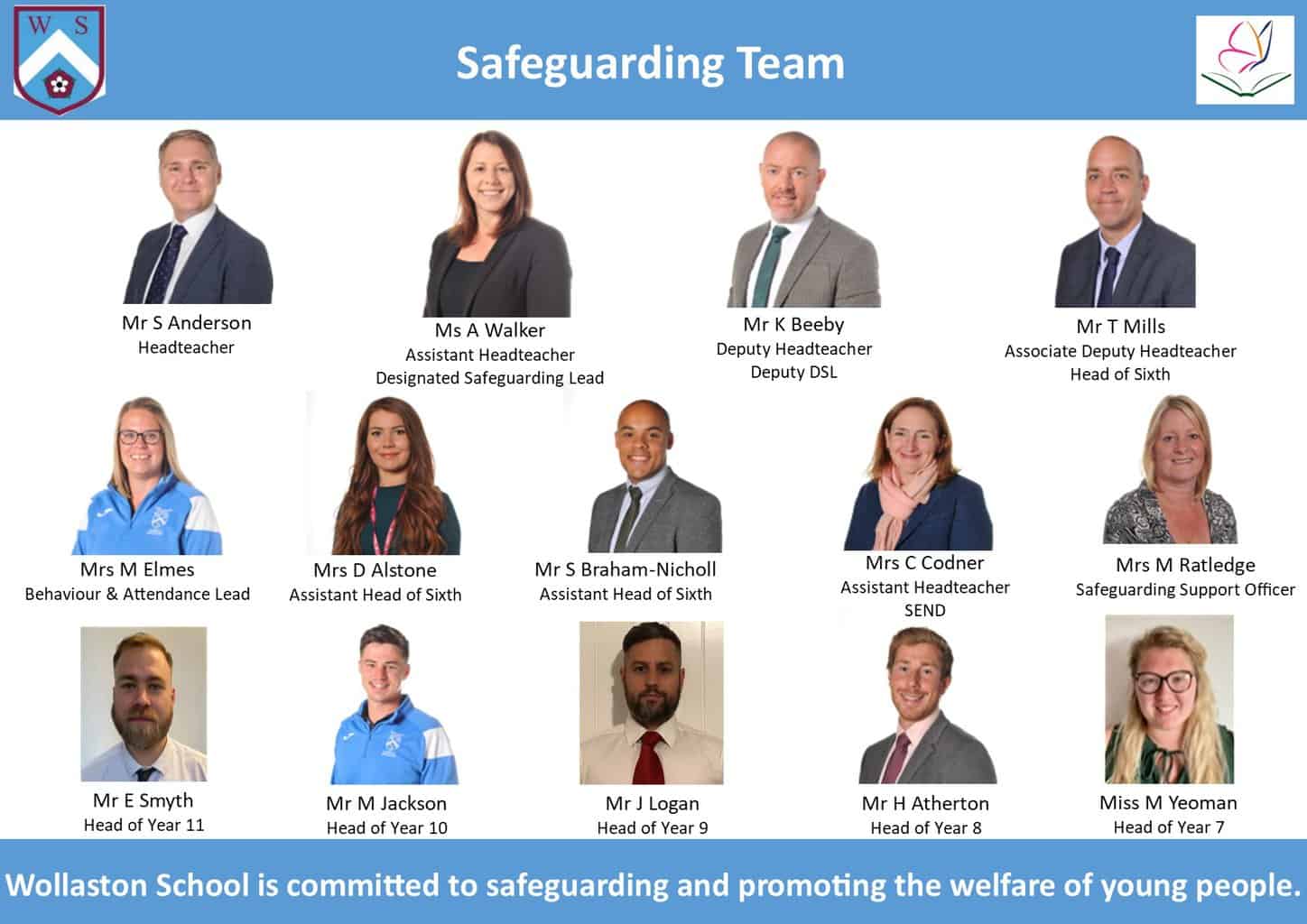 What to do if you have a safeguarding concern

Within school hours: contact a member of our Safeguarding team as listed above.

The Multi-Agency Safeguarding Hub (MASH) deal with referrals from professionals or members of the public who have concerns about a child’s welfare.

The Government provides guidance on 'Keeping Children Safe in Education', please click here to be taken to the GOV.UK website.

If you are a child and are worried about any issue there will always be someone for you to talk to.

Whether it’s a personal issue, a difficult situation in school, someone you are worried about at home or a friend that you think needs help there are many people that you can turn to in a variety of different means.

The Drop Box
Collect a card from the student services front desk, fill in your concern and drop it in the box on the wall. Someone will get back to you with advice or help.

Your Form Tutor
Your form tutor is there to offer advice and guidance when needed.

Your Head of Year
They are your dedicated year team who you can talk to about any concerns you have.

From September 2021, we have a dedicated team of pastoral support officers who are here to help. These include Safeguarding and Early Help, Emotional and Wellbeing Support, Attendance, Behaviour Support KS3 and KS4.

The Child Protection Team
Wollaston School has a team of specially trained staff who you can talk to and share issues that are concerning you.

The School Nurse
The school nurse can see students during school time, and you can book an appointment through your Head of Year, member of the pastoral support team or Miss Walker

A Mentor
You can request to have a student/ Sixth Form mentor who you can talk to. Just fill in a form and drop in the Drop Box near student services.

The Info Wall
The information wall outside of the canteen highlights people you can speak to and information you might find useful.

Send an email to worried@wollaston-school.net and a member of the pastoral team will

Neglect is the persistent failure to meet a child's basic physical and/or psychological needs, likely to result in the serious impairment of the child's health or development. Neglect involve a parent or carer failing to:

It may also include neglect of, or unresponsiveness to, a child's basic emotional needs

Physical abuse may involve hitting, shaking, throwing, poisoning, burning or scalding, drowning, suffocating or otherwise causing physical harm to a child. Physical harm may also be caused when a parent or carer *feigns the symptoms of, or deliberately induces illness in a child'. (*Fabricated and Induced Illness)

Emotional abuse is the persistent emotional ill-treatment of a child such as to cause severe and persistent adverse effects on the child's emotional development. It may involve conveying to children that they are worthless or unloved, inadequate, or valued only insofar as they meet the needs of another person. It may include:

They may also include non-contact abuse, such as involving children in looking at, or in the production of sexual images, watching sexual activities, encouraging children to behave in sexually inappropriate ways or grooming a child in preparation for abuse (including via the internet). This included child on child abuse between children.

At Wollaston School we encourage a culture of mutual respect, tolerance, kindness and we celebrate diversity. Furthermore we work hard to promote British Values through our curriculum, PSHE days, assemblies, and enrichment activities. These values (as defined by the Government) are:

We also recognise however that in today’s world our young people are faced with many pressures as they grow up and can often be influenced by strong feelings expressed by others in connection with a range of complex issues. Our overriding concern is that all our young people feel safe and also express tolerance towards all cultures and religions even when personal views may be different. We do not condone political, religious or cultural extremism in any form.

There are a number of behaviours which may indicate a child is at risk of being radicalised or exposed to extremist views which could include becoming distant or showing loss of interest in friends and activities or possession of materials or symbols associated with an extremist cause. We have a duty of care to ensure that all students in our school are protected from any dangers of being potentially or actually radicalised.

Staff are expected to be vigilant in protecting pupils from the threat of radicalisation and refer any concerns to the Designated Safeguarding Lead. Staff receive appropriate training through ‘Channel’ to ensure they have the knowledge and confidence to identify pupils at risk, challenge extremist ideas and know where and how to refer concerns.

If you have any concern regarding a young person becoming radicalised please contact Miss Walker – Designated Safeguarding Lead.

From 1 July 2015 all schools are subject to a duty under section 26 of the Counter-Terrorism and Security Act 2015, to have “due regard to the need to prevent people from being drawn into terrorism”. This duty is known as the Prevent duty.

1. Radicalisation refers to the process by which a person comes to support terrorism and forms of extremism leading to terrorism.

2. Extremism is defined by the Government in the Prevent Strategy as:

'Vocal or active opposition to fundamental British values, including democracy, the rule of law, individual liberty and mutual respect and tolerance of different faiths and beliefs. We also include in our definition of extremism calls for the death of members of our armed forces, whether in this country or overseas'.

3. Extremism is defined by the Crown Prosecution Service as:

The demonstration of unacceptable behaviour by using any means or medium to express views which:

5. Students may become susceptible to radicalisation through a range of social, personal and environmental factors. It is known that violent extremists exploit vulnerabilities in individuals to drive a wedge between them and their families and communities. It is vital that school staff are able to recognise those vulnerabilities.

6. Indicators of vulnerability include:

7. However this list is not exhaustive, nor does it mean that all young people experiencing the above are at risk of radicalisation for the purposes of violent extremism.

8. More critical risk factors could include:

Sexual exploitation of children and young people (under 18) involves exploitative situation, contexts and relationships where the young person receives something(Food, money, drink, drugs etc) as a result of them performing on another or others performing on them sexual activity.

Child sexual exploitation can occur through the use of the internet or on mobile phones. In all cases, those exploiting the child or young person have power over them because of their age, gender, intellect, physical strength and/or resources.

Perpetrators of these crimes are becoming increasingly sophisticated, using the internet to protect their identity and trafficking children around the country to avoid detection.

Signs a young person is being groomed include:

A - bsent from school or repeatedly running away

U - se of technology and sexual bullying

A - lcohol and drug misuse

If you have concerns that your child or another young person is being sexually exploited please contact Mrs Barton – Designated Safeguarding Lead.